Nancy Walker was an American actress, comedian and director, best remembered for her role as Ida Morgenstern in the 1970s television series Rhoda. Her career spanned five decades and included comedies, dramas, and television variety shows such as Faye Emerson’s Wonderful Town, The Garry Moore Show and The Carol Burnett Show. Walker was twice nominated for Broadway’s Best Actress (Musical) Tony Award for Actress in a Musical in 1956, for “Phoenix ’55,” and in 1961, for “Do Re Mi”. Born Anna Myrtle Swoyer on May 10, 1922 in Philadelphia, Pennsylvania, to parents Myrtle and Dewey Barto, she had one younger sister, Betty Lou (b. 1930). Walker made her Broadway debut in 1941 in Best Foot Forward. She had a daughter with second husband David Craig. She died in 1998 from lung cancer at the age of 69. 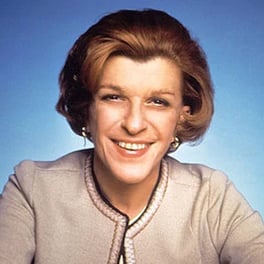 Nancy Walker Facts:
*She was born on May 10, 1922 in Philadelphia, Pennsylvania, USA.
*Her first major Broadway role was as the Blind Date in “Best Foot Forward” (1941).
*She was a lifelong Democrat and supported Adlai Stevenson’s campaign during the 1952 presidential election.
*She and her father both stood 4’11” (1.50 m).
*She died from lung cancer at 69.