Jeffrey Dean Morgan is an American actor. He is best known for starring as John Winchester in the fantasy horror series Supernatural, Denny Duquette in the medical drama series Grey’s Anatomy, the Comedian in the superhero film Watchmen, Jason Crouse in the political drama series The Good Wife, Negan in the horror drama series The Walking Dead, and Harvey Russell in Rampage. Morgan’s other notable works include Extant, Magic City, and Jam. Born on April 22, 1966 in Seattle, Washington, to parents Sandy Thomas and Richard Dean Morgan, he attended Lake Washington High School graduating in 1984 and briefly attended Skagit Valley College to pursue a career in basketball. Morgan was a major character in the 1996–97 television series The Burning Zone, appearing in eleven of its nineteen episodes. He has been married to Hilarie Burton since October 5, 2019. They have two children. He was previously married to Anya Longwell. 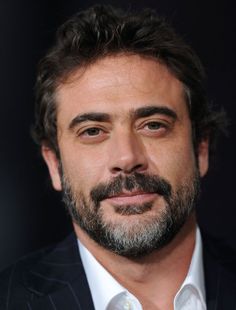 Jeffrey Dean Morgan Facts:
*He was born on April 22, 1966 in Seattle, Washington, USA.
*He graduated in 1984 from Lake Washington High School.
*In his free time he enjoys spending time with his friends and laughing as much as possible, painting, reading, and writing.
*He was once engaged to his former Weeds co-star Mary Louise Parker.
*He is a die-hard fan of Seahawks.
*He is friends with agent Richard Lewis.
*He has a dog named Bisou.
*Follow him on Twitter, Facebook and Instagram.