Natasha Poly is a Russian supermodel. She has appeared in campaigns for many important fashion houses such as Lanvin, Gucci, Dolce & Gabbana, Louis Vuitton, Roberto Cavalli, and Sonia Rykiel. She has also appeared on several magazine covers including Vogue, Elle, Vanity Fair, i-D, Numéro and Harper’s Bazaar. She also appeared in Victoria’s Secret fashion show in 2005 and 2006. She is represented by the agencies Women Management, Select Model Management, Traffic Models, Scoop Models, Modelink, and Mega Model. Born Natalia Sergeevna Polevshchikova on July 12, 1985 in Perm, Russia, to parents Sergey and Larisa Polevshchikova, she began her modeling career when she was a teenager. She has been married to Peter Bakker since April 16, 2011. They have two children. 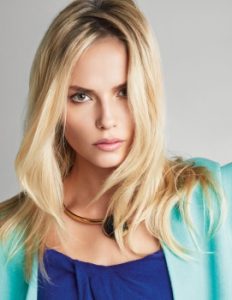 Natasha Poly Facts:
*She was born on July 12, 1985 in Perm, Permskaya oblast, RSFSR, USSR.
*She started modeling locally in 2000.
*She made her runway debut with Why Not Model Agency after walking for Emanuel Ungaro in 2004.
*She was featured in the 2011 and 2012 version of Pirelli calendar.
*She walked in the Victoria’s Secret Fashion Show in 2005 and 2006.
*Vogue Paris declared her as one of the top 30 models of the 2000s.
*She is best friends with models Eugenia Volodina, Tatiana Kovylina, Inguna Butane, Katja Schcekina and popular Russian musician DJ Smash.
*Follow her on Twitter, Facebook and Instagram.