Samantha Hoopes is an American model. She is best known for her appearance in the 2014 Sports Illustrated’s 50th Anniversary Swimsuit issue. She has also appeared in Carl’s Jr. and Hardee’s Most American Thickburger advertisement. She has modeled for brands such as Guess and Levi’s Jeans. Maxim named her #18 in its 2014 Hot 100 ranking of the world’s hottest women. Born on February 10, 1991 in Doylestown, Pennsylvania, USA, to parents Theresa and Robert Hoopes, she is the youngest of five sisters. She graduated from Central Bucks East High School, and went to Barbizon Performing Arts Academy, where she studied modeling and acting. She later earned a degree in business from Penn State University. In 2011, she moved to Hollywood and started her career. In July 2018, Hoopes became engaged to Italian entrepreneur Salvatore Palella. 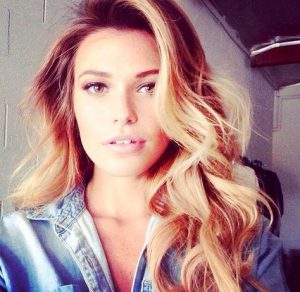 Samantha Hoopes Facts:
*She was born on February 10, 1991 in Doylestown, Pennsylvania, USA.
*She is the youngest in her family.
*She began her modeling career at the age of 14.
*She played field hockey while in middle school.
*She is a graduate of Central Bucks East High School.
*She appeared in GQ UK’s editorial “Body Heat” in February 2015.
*Visit her official website: www.samanthahoopes.com
*Follow her on Twitter, Facebook and Instagram.