American singer-songwriter, actress and television personality who rose to fame in the early 2000s as a member of the ill-fated girl-group Eden’s Crush and then was cast as the lead singer of the American pop/R&B girl group and dance ensemble the Pussycat Dolls. The P*ssycat Dolls achieved worldwide success with number-one singles “Don’t Cha”, “Stickwitu”, “Buttons”, and their multi-platinum debut album PCD. Scherzinger won Dancing with the Stars in 2010, and became a judge on The Sing-Off and on both US and UK versions of The X Factor. In November 2007, Scherzinger released her debut solo album, Killer Love, which debuted #8 on the UK Albums Chart and produced the singles “Poison”, “Don’t Hold Your Breath”, “Right There”, “Wet” and “Try with Me”. She has also appeared in a number of music videos, motion pictures and television programs. Born Nicole Prescovia Elikolani Valiente on June 29, 1978 in Honolulu, Hawaii, to parents Alfonso Valiente and Rosemary Elikolani, she is of Filipino descent on her father’s side, and of Hawaiian and Russian descent on her mother’s side. She has a younger sister named Ke’ala. Her parents separated when she was a baby. She took her German American stepfather’s surname when he adopted her. She studied musical theater at Wright State University. She has dated tennis player Grigor Dimitrov, Formula 1 racer Lewis Hamilton, and rugby player Thom Evans. 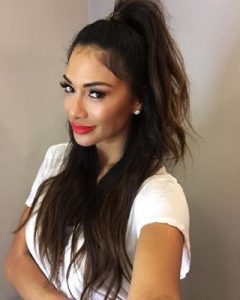