American actress who came to prominence at the age of seven after being cast in the 2001 drama film I Am Sam, for which she received a Screen Actors Guild Award nomination at age eight, making her the youngest nominee in SAG history. She has also starred in such films as Uptown Girls, The Cat in the Hat, Hounddog, Man on Fire, The Secret Life of Bees, The Runaways, War of the Worlds, Fragments, The Twilight Saga, Dreamer, Charlotte’s Web, and Once Upon a Time in Hollywood. She voiced the lead character Coraline Jones in the 2009 animated film Coraline. In 2018, Fanning began starring in the period drama miniseries The Alienist. 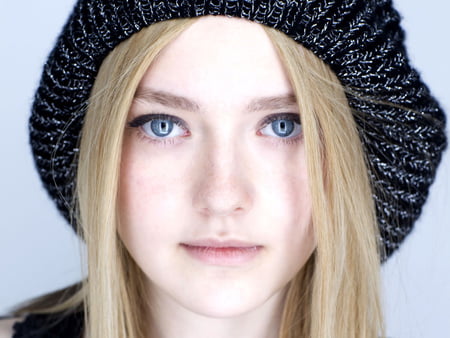 Dakota Fanning Facts:
*Born on February 23, 1994 in Conyers, Georgia, she is of English, French, Irish and German descent.
*Her parents are Heather Joy and Steven Fanning.
*Her younger sister, Elle Fanning, also became an actress.
*She and her family are Southern Baptist
*She attended a Montessori School in Covington and graduated from Campbell Hall School in Studio City, California.
*She was a cheerleader and was voted homecoming queen in high school.
*She majored in women’s studies at the Gallatin School of Individualized Study at New York University.
*She began her career in a national commercial for Tide at the age of five.
*She had her breakthrough in 2001 while portraying Lucy Dawson in the drama film I Am Sam.
*She made her modelling debut in 2009 appearing on the cover of fashion magazines Elle, Vanity Fair, and Cosmopolitan, among others.
*She is good friends with Kristen Stewart.
*Her tutor is Jan Cerwonka.
*She has a schnoodle dog named Lewellen.
*She has dated model Jamie Strachan and Henry Frye.
*Follow her on Instagram.