Nicole Trunfio is an Australian model who won the third installment of the Australian television series Supermodel of Australia in 2002 and came second in the international version, Supermodel of the World. Trunfio has worked with such designers as Chanel, Dolce & Gabbana, Versace, Roberto Cavalli, Vivienne Westwood, Christian Dior, Gucci, Fendi, Missoni, Valentino, Victoria’s Secret, Sweetface, and Neiman Marcus. She has appeared on several magazine covers including ELLE, Vogue, and Harpers Bazaar. She is represented by the agencies IMG Models (New York), Iconic Management (Germany) and Viviens Model Management (Australia). Born on March 16, 1985 in Merredin, Australia, to parents Kim and Giuseppe Trunfio, she is the youngest of four children. She attended St. Mary’s Primary School in Merredin. She is married to American musician Gary Clark, Jr., with whom she has a son named Zion and a daughter named Gigi. 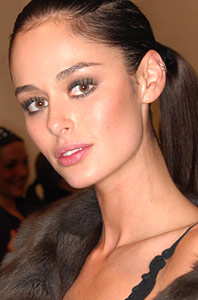 Nicole Trunfio Facts:
*The youngest of four children, Trunfio was born on March 16, 1985 in Merredin, Australia.
*She was the winner of Australia’s Search for a Supermodel competition.
*She has graced numerous magazine covers.
*She replaced Miranda Kerr to become the face of David Jones’ 2011 launch.
*Visit her official website: www.nictrunfio.com
*Follow her on Twitter, Facebook and Instagram.