Niki Taylor is an American supermodel and television personality. She has appeared on the covers of numerous fashion magazines, including Allure, Vogue, ELLE, Marie Claire, Self, Shape, Seventeen, Harpers Bazaar, Paper Magazine, and Flaunt Magazine. Taylor appeared in the 1997 and 1998 editions of the Sports Illustrated Swimsuit Issue, and was the cover-model of the 1998 Sports Illustrated swimsuit calendar. She has also modeled for campaigns including Thierry Mugler, Escada, Liz Claiborne, Anne Klein, L’Oréal, Jean Paul Gaultier, Versace, Versus, Gap, Lee Jeans, and Pantene. Taylor was a contestant on the fourth edition of The Celebrity Apprentice in March 2011. She’s is represented by the agencies One Model Management (New York), d’management group (Milan), Established Models (London), Sutherland Models (Toronto), and Visage Management (Zurich). Born Nicole Renee Taylor on March 5, 1975 in Fort Lauderdale, Florida, to parents Ken and Barbara Taylor, she was raised in Pembroke Pines, Florida, and graduated from high school in the spring of 1993. She has an older sister named Joelle, and had a younger sister named Krissy. She has been married twice, from 1994 to 1996 to the former Miami Hooters linebacker Matt Martinez, with whom she had twin sons, Jake and Hunter, and since 2006 to NASCAR driver Burney Lamar, with whom she has a daughter named Ciel Taylor and a son named Rex Harrison Lamar. 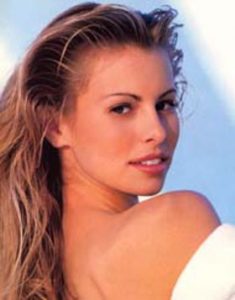 Niki Taylor Facts:
*She was born on March 5, 1975 in Fort Lauderdale, Florida, USA.
*She was educated at Cooper City High School.
*At age 13, she signed with Irene Marie Models in South Florida.
*At age 14, she was featured on the cover of Seventeen magazine.
*At age 15, she was featured on the cover of Vogue, becoming the second youngest person to appear on the cover of the magazine, after Brooke Shields.
*At age 16, she became the youngest person ever to be featured as one of People magazine’s Most Beautiful People.
*She launched her first fragrance, “Begin by Niki Taylor” in 2005.
*In 2008, she co-hosted the new Bravo series Make Me a Supermodel.
*On April 29, 2001, she was almost killed in a car accident in Atlanta, Georgia.
*She is best friends with Karen Mulder, Tyra Banks, Yasmeen Ghauri, Tyson Beckford, and Amber Valetta.
*She is an American Red Cross ambassador.
*Visit her official website: www.nikitaylor.com
*Follow her on Twitter, Facebook and Instagram.