Indian film actress and playback singer Nithya Menen who appears mainly in Kannada, Malayalam, Telugu and Tamil cinema. She is known for her roles in the films Ala Modalaindi, O Kadhal Kanmani, Ishq, Gunde Jaari Gallanthayyinde and Malli Malli Idi Rani Roju. Menen was born in Bangalore, Karnataka to a Malayali family. She attended Manipal University, where she studied journalism. She is also known as playback singer in her films. 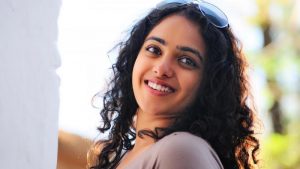 Nithya Menen Facts:
*Her father’s family is from Calicut, while her mother’s family is from Palakkad.
*Received 2 Filmfare Awards for the Telugu films Malli Malli Idi Rani Roju and Gunde Jaari Gallanthayyinde.
*She earned the Nandi as well as Ugadi Puraskar awards for Best Actress for her breakout role in Ala Modalaindi.
*Follow her on Instagram.