American singer-songwriter whose debut studio album, Come Away with Me (2002) peaked at #1 on the US Billboard 200, and received Grammy Awards for Album of the Year and Best Pop Vocal Album. It was later certified Diamond by the RIAA and has sold over 27 million copies worldwide as of 2016 making it one of the best-selling albums of all time. Jones’s second studio album, Feels like Home (2004), debuted at #1 in at least 16 countries. At the 47th Annual Grammy Awards the album was nominated for Best Pop Vocal Album. “Sunrise”, the album’s lead single, won the Grammy Award for Best Female Pop Vocal Performance. “Creepin’ In”, featuring Dolly Parton, was also nominated for a Grammy, in the category of Best Country Collaboration with Vocals. Jones made her feature film debut as an actress in 2007 in the romance/drama film My Blueberry Nights, directed by Wong Kar Wai, co-starring Jude Law, David Strathairn, Rachel Weisz and Natalie Portman. 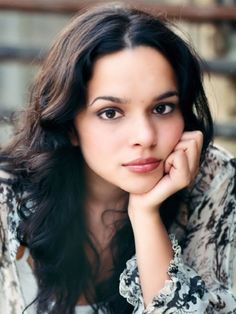 Born Geetali Norah Jones Shankar on March 30, 1979 in Manhattan, New York, she is the daughter of legendary Indian musician Ravi Shankar and Sue Jones. She has an older half-brother named Shubhendra Shankar and a younger half-sister named Anoushka Shankar. She attended Colleyville Middle School and Grapevine High School in Grapevine, Texas, and graduated from Booker T. Washington High School for the Performing and Visual Arts in Dallas. She also studied at the University of North Texas where she majored in jazz piano but left before her 3rd year. She is married and has two children.

Norah Jones Facts:
*She was born on March 30, 1979 in Manhattan, New York, USA.
*Her father is of Bengali Indian descent, and her mother is of American descent.
*She has won multiple awards and has sold more than 50 million records worldwide.
*Billboard named Jones the top jazz artist of the 2000s decade.
*She has won nine Grammy Awards and was ranked 60th on Billboard magazine’s artists of the 2000s decade chart.
*Time magazine named her one of the most influential people of 2004.
*She dated American bassist, songwriter and music producer Lee Alexander from 2000 until January 2008.
*Visit her official website: www.norahjones.com
*Follow her on Twitter, YouTube, Facebook and Instagram.