Nyla Usha is an Indian actress, model and DJ who gained much recognition by portraying the role of Chithira in the Malayalam film Kunjananthante Kada. Before starting her career in the film industry, she was a popular DJ for Dubai’s Hit 96.7 radio station. She was born on March 25, 1984 in Dubai, United Arab Emirates to Gopakumar and Usha Kumari. She has a brother, Kannan and sister, Athira. She has been married to Rona Rajan since 2007. They have a son together. 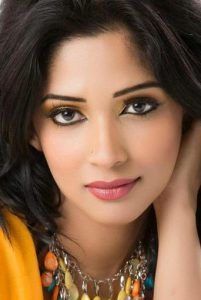 Nyla Usha Facts:
*She made her acting debut in the Malayalam film Kunjananthante Kada which was released in 2013.
*She was a popular DJ before starting her career in the film industry.
*In 2016, she began hosting the Malayalam version of Minute to Win it in Mazhavil Manorama.
*Follow her on Twitter, Facebook and Instagram.