Model, actor and deaf activist, best known for winning the Cycle 22 of America’s Next Top Model in 2015. DiMarco also won season 22 of the ABC televised dance competition Dancing with the Stars, with professional dance partner Peta Murgatroyd. He is represented by the agencies Wilhelmina Models (New York) and CESD Talent Agency (Los Angeles). As an actor, he had a leading role in the 2013 independent film In the Can, an American Sign Language Films production, and played the recurring role of Garrett Banducci in Switched at Birth on the Freeform network in 2014 and 2015. Born Nyle Thompson on May 8, 1989 in Queens, New York, to parents Donna DiMarco and Neal Thompson, he has a fraternal twin named Nico and an older brother named Neal. He attended the Maryland School for the Deaf and graduated from Gallaudet University with a degree in mathematics in 2013. 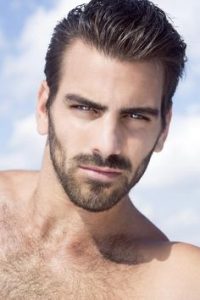 Nyle DiMarco Facts:
*He was born on May 8, 1989 in Queens, New York, USA.
*He became the second male winner and first Deaf winner on The CW’s America’s Next Top Model.
*He won season 22 of ABC’s Dancing with the Stars in 2016.
*Visit his official website: www.nyledimarco.com
*Follow him on Twitter, YouTube, Facebook and Instagram.