Olga Kurylenko is a French-Ukrainian actress and model. She is best known for playing the role of Bond girl Camille Montes in the movie Quantum of Solace. She has also played prominent roles in the films Momentum, To the Wonder, Oblivion, Max Payne, The Water Diviner, and Hitman. Born Olga Konstantinovna Kurylenko on November 14, 1979, in Berdyansk, Ukraine to Marina Alyabusheva and Konstantin Kurylenko, she is of Ukrainian descent on her father’s side, and of Russian and Belarusian descent on her mother’s side. Her parents got divorced when she was three years old and she was raised by her single mother. She was discovered by a female model scout at the age of 13. She moved to Paris when she was 16 for her career. She started acting in 2005. She was married to French fashion photographer Cedric Van Mol from 2000 to 2004 and mobile phone accessory entrepreneur Damian Gabriel Neufeld from 2006 to 2007. She has been in a relationship with Max Benitz. Together they have one son, Alexander Max Horatio. 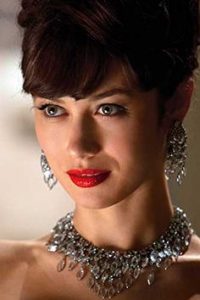 Olga Kurylenko Facts:
*She was discovered at 13 when she was vacationing in Moscow, Russia.
*She speaks Russian, English, French, Spanish and Italian fluently.
*She became French citizenship in 2001.
*She studied piano for 7 years.
*She has featured in numerous magazine covers and shoots, including Madame Figaro and Marie Claire magazines.
*As a model, she has appeared for Roberto Cavalli and Kenzo and appeared in the Victoria’s Secret catalogue.
*Follow her on Twitter, Facebook and Instagram.