Patrick J. Adams is a Canadian actor, best known for his role as Mike Ross on the USA Network series Suits. In 2008, he starred as twin brothers in the ABC pilot Good Behavior and appeared in HBO’s 2012 TV series Luck as recurring character Nathan Israel. Adams’s other notable works include Commander in Chief, Friday Night Lights, The Dealership, Orphan Black, Legends of Tomorrow, and Pillow Talk. Outside of acting, Adams plays the guitar and is an avid photographer who owns over 60 cameras. Born Patrick Johannes Adams on August 27, 1981 in Toronto, Ontario, Canada, to parents Rowan Marsh and Claude Adams, he has a sister named Meredith. Adams attended Northern Secondary School and received a degree in theater from the University of Southern California. He is married to actress Troian Bellisario with whom he has a daughter named Aurora. 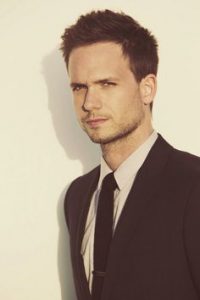 Patrick J. Adams Facts:
*He was born on August 27, 1981 in Toronto, Ontario, Canada.
*He graduated from the University of Southern California with a BFA in Acting.
*In 2011, Adams joined the cast of the USA Network show Suits.
*He is an avid photographer.
*He plays the guitar.
*He was born on the same date as Sugar Lyn Beard.
*Visit his official website: www.halfadams.com
*Follow him on Twitter, Facebook and Instagram.