Actor and musician who first achieved recognition starring in the soap opera The Young and the Restless, which earned him a Young Artist Award nomination. Badgley had his breakthrough in 2007 while portraying Dan Humphrey in The CW teen drama series Gossip Girl, for which he received six Teen Choice Award nominations. In 2018, Badgley began starring in the Netflix thriller series You as Joe Goldberg. He is the lead vocalist of the indie band known as MOTHXR, whose debut studio album, Centerfold, was released in 2016. 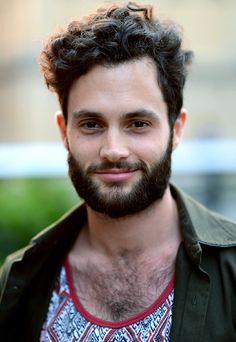 Penn Badgley Facts:
*Born on November 1, 1986 in Baltimore, Maryland, he is an only child.
*His parents divorced when he was twelve.
*He moved to Hollywood at the age of 11.
*He would like Gary Oldman to play the movie version of his life.
*He was included on People magazine’s list of “25 Beauties at 25” and BuddyTV’s “TV’s 100 Sexiest Men” list, both in 2011.
*He has a tattoo of a feather on his right leg.
*He plays guitar, bass and sings.
*He dated Zoe Kravitz from 2011 to 2013.
*He is married to singer Domino Kirke, with whom he has a son named James.
*He is good friends with Shawn Pyfrom.
*His favorite musician of all time is D’Angelo. His favorite album is ‘Voodoo’.