Viktorija Golubic is a Swiss professional tennis player who achieved a career-high singles ranking of World No. 48 on July 12, 2021, and a doubles ranking of world No. 63 on January 15, 2018. Turning professional in 2010, Golubic has won one singles title on the WTA tour, two singles WTA Challenger titles, as well as nine singles and 14 doubles titles on the ITF Women’s Circuit so far. 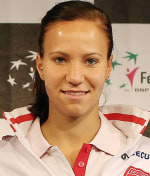 Viktorija Golubic Facts:
*She was born on October 16, 1992 in Zürich, Switzerland.
*She has a sister, Natalija and two brothers, Kristijan and David.
*She began playing tennis at age 5.
*She started playing on the ITF Women’s Circuit at the $10K event in Budapest in June 2008.
*She turned professional in 2010.
*She played her first two WTA qualifying tournaments at the Hungarian Ladies Open and Gastein Ladies in 2010.
*She made her WTA Tour main-draw debut at the Gastein Ladies in 2013, where she recorded her first WTA win and reached second round.
*She won her eighth ITF title at the $25K event in Hong Kong, and reached her first Grand Slam main draw at the Australian Open through qualifying and lost to Carla Suárez Navarro in the first round of the tournament.
*Visit her official website: www.viktorijagolubic.com