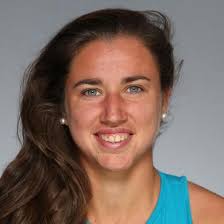 Sara Sorribes Tormo Family Details:
Father: Works in real estate and used to play pro soccer in the past
Mother: Owns a souvenir shop and also used to be a tennis instructor
Spouse/Husband: Unmarried
Children: No
Siblings: Pablo (Brother)

Sara Sorribes Tormo Facts:
*She was born on October 8, 1996 in Castellón de la Plana, Spain.
*Her mother owns a souvenir shop and also used to be a tennis instructor, while her father works in real estate and used to play pro soccer in the past.
*Her mother introduced her to the sport at age 6.
*Growing up, Sara enjoyed watching Justine Henin, and now she also admires David Ferrer and Sara Errani.
*She turned professional in 2012.
*She had a career-high junior ranking of No. 33, and won three singles and three doubles titles on the ITF Junior Circuit.
*She was runner-up at 2013 US Open in doubles, where together with Belinda Bencic, they lost to the Czech duo Barbora Krejčíková & Kateřina Siniaková.
*She won the European Junior Championships, defeating her countrymate Paula Badosa in the final. (2014)
*She made her WTA Tour main-draw debut at the 2015 Rio Open, after making it through the qualifying rounds.
*She made her debut in 2015 Fed Cup World Group II Play-off, and has a win-loss record of 4–3.
*Her favorite shot is volley, while favorite surface is clay.
*Sara’s favorite tournament is Roland Garros.