Peter Sarsgaard is an American actor best known for his role as Charles Lane in the 2003 film Shattered Glass. His other notable film credits include The Man in the Iron Mask, Kinsey, Boys Don’t Cry, Green Lantern, Lovelace, Pawn Sacrifice, and Jackie. Peter was born John Peter Sarsgaard on March 7, 1971 in Belleville, Illinois, to Judy Lea and John Dale Sarsgaard. He has been married to actress Maggie Gyllenhaal since 2009. They have two daughters, Gloria Ray and Ramona Sarsgaard. 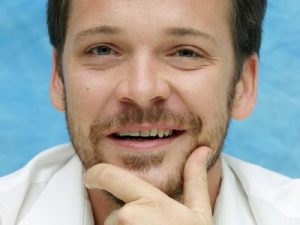 Peter Sarsgaard Facts:
*He is vegan.
*Dallas Cowboys running back Tony Dorsett was his childhood hero.
*He is an avid runner. Runs 50-60 miles per week.
*Good friends with Vera Farmiga and ultra marathon champion Scott Jurek.
*Follow him on Twitter, Facebook and Google+.