Qin Shupei is a Chinese model and actress who has modeled for campaigns including Maybelline, Vera Wang, and Michael Kors. She has walked runways for Burberry, Christian Dior, Versace, Chanel and Gucci. She also walked in the Victoria’s Secret Fashion Show in November 2012. She has also appeared in high profile magazines such as Elle China, Harper’s Bazaar China and Vogue China. In March 2015, Qin appeared in the film Oh My God, directed by Leste Chen. She is represented by the agencies DNA Models (New York) and Oui Management (Paris). Born on August 10, 1990 in Kaifeng, China, Qin started modeling professionally in 2007 by signing with Next Model Management in New York. She was married to Zhao Lei from 2012 to 2015. Since 2015, she has been in a relationship with actor Edison Chen with whom she has a daughter, Alaia Chen. 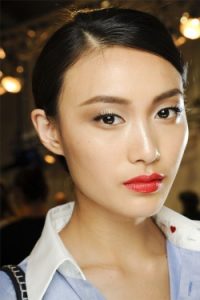 Qin Shupei Facts:
*She was born on August 10, 1990 in Kaifeng, China.
*She was discovered as a model while studying in New York City.
*She signed with Next Management in 2007.
*She was appeared on the cover of Chinese Elle five times from 2009 to 2013.
*She was named as the new spokesmodel for the cosmetics company Maybelline in August 2010.
*She is close friends with Liu Wen and Ming Xi.
*She is good friends with Ksenia Kakhnovich, Shelby Coleman, Bonnie Chen, David Chiang, Du Juan, Fei Fei Sun, Sui He, and Wang Xiao.
*Follow her on Twitter and Instagram.