Rachel Lindsay is an American attorney and television personality. She is best known for her appearances in season twenty-first of the American Broadcasting Company reality television show The Bachelor, and season 13 of The Bachelorette. Rachel was the 1st African American Bachelorette in the franchise’s history. As an attorney, Rachel worked for the firm Cooper and Scully in Dallas, Texas. Born Rachel Lynn Lindsay on April 21, 1985 in Dallas, Texas, USA, to parents Kathy and Sam A. Lindsay, she has an older sister named Constance, and a younger sister named Heather. She received a degree in kinesiology and sports management at the University of Texas and obtained her law degree from Marquette University in Milwaukee, Wisconsin. She got engaged to Bryan Abasolo in 2017. 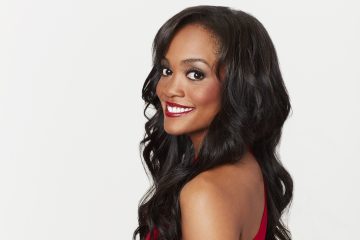 Rachel Lindsay Facts:
*She was born on April 21, 1985 in Dallas, Texas, USA.
*She holds Bachelor of Science degree in Kinesiology and Sport Management from The University of Texas at Austin and J.D. degree from Marquette University Law School.
*She was a contestant on the 21st season of The Bachelor.
*She made history as the first African-American Bachelorette in the ABC franchise’s history.
*She has got a bible verse tattooed on her left waist.
*Follow her on Twitter and Instagram.