Rachel Sterling is an American actress and comedian. She is best known for her roles in the comedy series The Man Show and Reno 911!. She has also appeared in the films Wedding Crashers, All About Steve and Surrogates. As a model, Sterling has appeared on several magazines including Playboy, Maxim, Esquire, and FHM. She was a pin up model and video vixen featured in music videos by bands and artists such as Kid Rock, Dr. Dre, Shaggy, Enrique Iglesias, Nas, Third Eye Blind, Sugar Ray, Ja Rule, Velvet Revolver, No Doubt, Wyclef Jean, Lil Kim, Blink 182, Chief Wakil, Limp Biszket, Saliva, and George Michael. 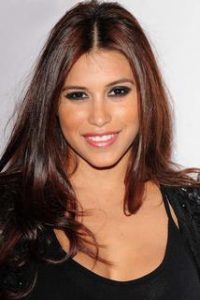 Rachel Sterling Facts:
*She was born on November 11, 1979 in Corpus Christi, Texas, USA.
*She is of Mexican, Spanish and Apache descent.
*She started her training at the Piero Dusa Acting Conservatory in Santa Monica California.
*Worked as a lingerie model for www.trashy.com
*She debuted as an actress in the film TomCats.
*She was an original member of the The P*ssycat Dolls.
*On February 14, 2017, she married DWTS/ Ballroom dancer Damian Whitewood.
*Follow her on Facebook and Instagram.