Radhika Apte is an Indian actress of film and theatre. She is best known for roles such as Phaguniya in the biographical film Manjhi – The Mountain Man, Kumudhavalli in the Tamil drama Kabali, Tripti Gokhale in the comedy Hunterrr, Lajjo in Parched and Mehak Deo in Phobia. She is also notable for her roles as Kanchan (Koko) in the thriller Badlapur, Nandini in Rakht Charitra I and Nalini in Dhoni. Born on September 7, 1985 in Pune, Maharastra, India, into a Marathi community, her father, Dr. Charudutt Apte, is a Pune’s leading neurosurgeon and chairman of Sahyadri Hospital. She is a Fergusson College graduate with a degree in economics and mathematics. Apte began her acting career in theatre, working with the theatre troupe Aasakta in her home town, before venturing into films. She made her feature film debut in Vaah! Life Ho Toh Aisi! (2005). She married British composer Benedict Taylor in 2012. 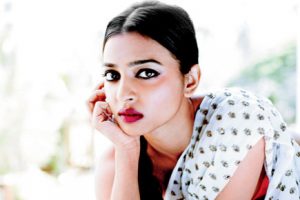 Radhika Apte Facts:
*She was born in Pune, Maharastra, India on September 7, 1985.
*She is a trained classical dancer.
*She has appeared in Hindi, Tamil, Malayalam, Bengali, Telugu, and Marathi-language films.
*She met her future husband, Benedict Taylor in 2011 in London.
*Follow her on Twitter and Instagram.