Rainn Wilson is an American actor. He is best known for his portrayal of Dwight Schrute on the NBC sitcom The Office, for which he earned three consecutive Emmy Award nominations for Outstanding Supporting Actor in a Comedy Series. He also had a recurring part as Arthur Martin in the HBO series Six Feet Under from 2003 to 2005. Wilson’s other notable works include Backstrom, Mom, Utopia, The Boy, The Rocker and Super. 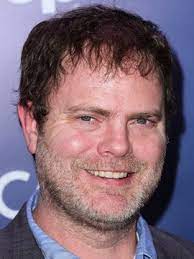 Rainn Wilson Facts:
*Born on January 20, 1966 in Seattle, Washington, he is of English and Norwegian descent.
*He played the clarinet and bassoon in the school band.
*He began acting at the University of Washington, and made his film debut in Galaxy Quest (1999).
*He played Dwight Schrute in the comedy sitcom The Office from 2005 to 2013.
*He is a passionate hobby chess player.
*He has two pit-bulls named Pilot and Oona.
*Follow him on Twitter, Facebook and Instagram.