Rakul Preet Singh is an Indian actress and model, active primarily in Tamil and Telugu films. And also appeared in Hindi and Kannada films. Her notable film appearances include: Venkatadri Express, Rough, Loukyam, Bruce Lee, Spyder, Rarandoi Veduka Chudham, Current Theega, Nannaku Prematho, Sarrainodu, Kick 2, Jaya Janaki Nayaka, Theeran Adhigaaram Ondru, and Dhruva. In 2011, she competed in the Miss India beauty pageant, where she was placed 5th and won five pageant titles including ‘Miss India People’s Choice’. She has been appointed as the brand ambassador for Beti Bachao, Beti Padhao programme by Telangana State Government. Born on October 10, 1990 in New Delhi, India, to parents Kulwinder and Rajender Singh, she has one brother named Aman. She completed her schooling from Army Public School in Dhaula Kuan and later on completed her Honors’ Degree in Mathematics from Jesus and Mary College, University of Delhi. She began her career as a model while she was in college and did several commercial flyers. She debuted as Arati in the 2009 Kannada film, Gilli. 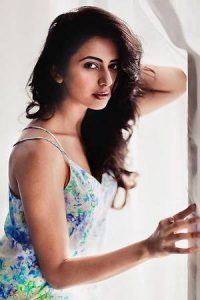 Rakul Preet Singh Facts:
*She was born on October 10, 1990 in New Delhi, India.
*She has been an active golf player and played at national levels.
*She started her career as a model at age 18 while she was in college.
*She made her film debut in 2009 with Kannada film ‘Gilli’.
*She is a big fan of badminton player Saina Nehwal.
*She is a blue belt in Karate.
*Follow her on Twitter, YouTube, Facebook and Instagram.