Reba McEntire is an American country music singer, songwriter, actress, and record producer who released many hit singles and albums. One of the best-selling artists of all time, Reba has sold more than 80 million records worldwide. Her debut single, “I Don’t Want to Be a One Night Stand” reached No. 88 on the country chart. In 1982, McEntire had her first #1 single, “Can’t Even Get the Blues.” Her next single, “You’re the First Time I’ve Thought About Leaving,” also hit #1. Her highest-certified album is the 1993 compilation Greatest Hits Volume Two, which is certified quintuple-platinum for U.S. shipments of five million copies. She also acted in her television sitcom, Reba, for which she was nominated for the Golden Globe Award for Best Performance by an Actress in a Television Series–Musical or Comedy. Born Reba Nell McEntire on March 28, 1955 in McAlester, Oklahoma, to Jacqueline Smith and Clark McEntire, she was raised in Denison, Texas. Her older brother, Pake McEntire, became a popular country singer during the 1980s and her younger sister, Susie Luchsinger, was a popular Christian singer. Reba made her singing debut in the first grade with a solo of “Away in a Manger” in a school Christmas play. She attended Southeastern Oklahoma State University, where she majored in elementary education and minored in music. She was married to steer wrestling champion Charlie Battles from 1976 to 1987. Just two years later, she married her second husband Narvel Blackstock, with whom she had a son named Shelby in 1990. They divorced in 2015. 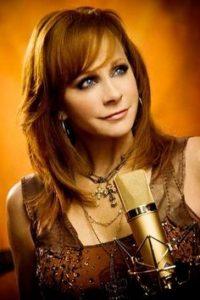 Reba McEntire Facts:
*She was born in McAlester, Oklahoma and grew up in Denison, Texas.
*She was named after her maternal grandmother, Reba Estelle Brassfield.
*As a child, she was in the family singing group “the Singing McEntires”.
*She was a member of a campus singing and dancing group called the Chorvettes while in college.
*She was educated at Kiowa High School and Southeastern State University.
*Her entire band died in a plane crash in 1991.
*She was named the No.1 Best-selling Female Country Singer of All Time in 2000.
*Visit her official website: www.reba.com
*Follow her on Twitter, YouTube, Myspace, Facebook and Instagram.