Rene Russo is an American actress, model and producer who rose to stardom with roles in the films Lethal Weapon 3, In the Line of Fire, Outbreak, Get Shorty, Ransom, Lethal Weapon 4, and The Thomas Crown Affair. In 2014, Russo starred as Nina Romina in the acclaimed crime thriller Nightcrawler, for which she won the Saturn Award for Best Supporting Actress and was nominated for the BAFTA Award for Best Actress in a Supporting Role. Her other notable film appearances include: Yours, Mine and Ours, Thor, Thor: The Dark World, Avengers: Endgame, The Intern, Just Getting Started, and Velvet Buzzsaw. 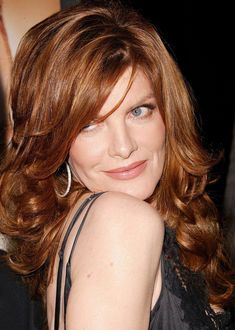 Born Rene Marie Russo on February 17, 1954 in Burbank, California, to parents Shirley and Nino Russo, she is of Italian descent on her father’s side, and of Italian and German-English-Irish descent on her mother’s side. Russo was educated at Burroughs High School. She was discovered at a Rolling Stones concert when she was 18. She married screenwriter Dan Gilroy in 1992. Together they have one daughter, Rose Gilroy.

Rene Russo Facts:
*She was born on February 17, 1954 in Burbank, California, USA.
*She has suffered from bipolar disorder since she was a young girl.
*She worked in an eyeglass factory and as a movie cashier after high school.
*She began her career as a fashion model in the 1970s, appearing on magazine covers such as Vogue and Cosmopolitan.
*She made her television debut in 1987 with a supporting role on the short-lived TV series Sable.
*She made her film debut in the 1989 film Major League.
*She is allergic to sesame.