Rima Fakih is a Lebanese-American actress, model and beauty pageant titleholder who crowned Miss USA 2010 beauty pageant. She represented the state of Michigan in the national pageant, having previously won the 2010 Miss Michigan USA pageant. Rima was born on September 22, 1985 in Srifa, Lebanon into a Shi’a Muslim family. Her parents are Hussein Fakih and Nadia Fakih. She is of Middle Eastern descent and has four siblings. She has been married to Lebanese-Canadian entrepreneur Tony Sal since May 15, 2016. 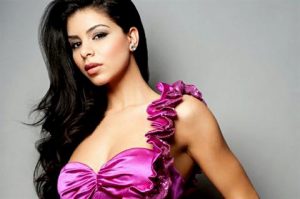 Rima Fakih Facts:
*Her parents moved from Lebanon to New York in order to escape effects of the Lebanese Civil War in 1993.
*She converted to Christianity from Shi’a Muslim.
*She is the first Arab-American, Muslim or immigrant to win the Miss USA title.
*Visit her official website: www.rimafakih.com
*Follow her on Twitter, Facebook and Instagram.