Rita Ora is a British singer, songwriter and actress whose debut studio album, Ora, released in August 2012, entered the charts at number one in the United Kingdom and number two in Ireland. The album’s hit songs included “R.I.P.” and “How We Do (Party).” Ora’s second studio album, Phoenix, released in November 2018, spawned three top ten UK singles including “Your Song”, “Anywhere” and “Let You Love Me”, as well as a top forty single, “Girls”. Also an actress, Ora played Mia Grey in the 2015 movie Fifty Shades of Grey.

Born Rita Sahatçiu Ora on November 26, 1990 in Pristina, Kosovo, to Albanian parents Vera and Besnik Sahatçiu, she is a granddaughter of director Besim Sahatçiu. She has a brother named Don and a sister named Elena. Her family moved to the United Kingdom when she was 1. 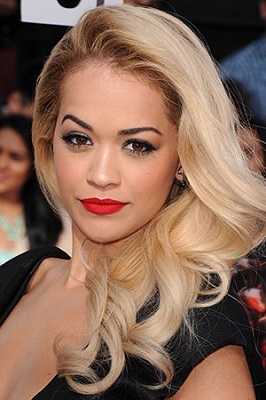 Rita Ora Facts:
*She was born on November 26, 1990 in Pristina, SFR Yugoslavia.
*She was named after actress and dancer Rita Hayworth.
*She attended the Sylvia Young Theatre School.
*She began singing from a young age.
*She was the artist with the most number-one singles on the UK Singles Chart in 2012, with three singles reaching the top position.
*She is friends with Ed Sheeran and Kate Moss.
*Visit her official website: www.ritaora.com
*Follow her on Twitter, SoundCloud, YouTube and Instagram.