Rita Simons is a British actress, model, and singer. She is best known for portraying Roxy Mitchell in the BBC soap opera EastEnders from 2007 to 2017. Simons took part in the 18th series of I’m a Celebrity, Get Me Out of Here! in 2018, finishing 8th out of 11 celebrities. Born Rita Joanne Simons on March 10, 1977 in Essex, England, UK, to parents Susan and Mark Simons, she has an older brother named Benjamin. Her uncle is billionaire Lord Sugar, known for appearing in the BBC reality series The Apprentice. She was a member of the band Girls@Play, who had a couple of hit singles before splitting up. Simons began her acting career in 2002 with the TV’s Dream Team. In August 2004, she married hairdresser Theo Silveston with whom she has twin daughters Jaimee Leah and Maiya Sammy Silveston. 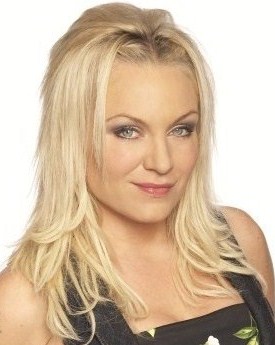 Rita Simons Facts:
*She was born on March 10, 1977 in Essex, England, UK.
*She was part of the band Girls@Play (2000-2001).
*She competed on I’m a Celebrity Get Me Out of Here! in 2018.
*She is best friends with Samantha Womack, who played her older sister, Ronnie Mitchell in EastEnders.
*She is very close friends with EastEnders co-star Diane Parish.
*She was suffering from ADHD, OCD, anxiety and insomnia.
*In August 2004, she married hairdresser Theo Silveston with whom she was in a relationship for 8 years.
*Follow her on Twitter and Instagram.