Rizwan Manji is a Canadian actor. He is best known for his role as Rajiv Gidwani in the NBC Universal TV series Outsourced. Other notable television roles include Rami in Privileged, Dr. Deb Chaman in Backstrom, Ray Butani in Schitt’s Creek, Tick Pickwick in The Magicians, Todd in Rob Riggle’s Ski Master Academy, Vice Principal Virman in Sydney to the Max, and Reverend Jax in Perfect Harmony. His films credits include American Desi, The Guru, Transformers, Charlie Wilson’s War, Morning Glory, The Dictator, The Citizen, The Wolf of Wall Street, Don Jon, Decoding Annie Parker, Dr. Cabbie, Alexander and the Terrible, Horrible, No Good, Very Bad Day, Equals, Miss India America, Paterson, The Tiger Hunter, The Bounce Back, and The Man Who Killed Hitler and Then the Bigfoot. Born on October 17, 1974 in Toronto, Canada, to Indian parents who were immigrated from Tanzania, he was raised in the Ismaili Muslim faith. He was educated at Crescent Heights High School and University of Alberta, and attended the American Musical and Dramatic Academy in the United States. In 2002 he married Taslim Manji. They have three children. 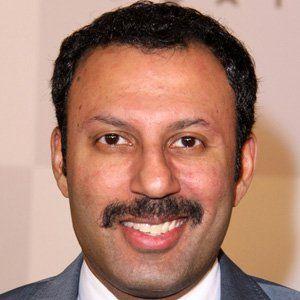 Rizwan Manji Facts:
*He was born on October 17, 1974 in Toronto, Canada.
*His family is Ismaili Muslim of Gujarati Indian descent.
*He and his family moved to Calgary, Alberta when he was in first grade.
*From 2010 to 2011, Manji played Rajiv Gidwani in the NBC Universal TV series Outsourced.
*Follow him on Twitter, Facebook and Instagram.