Robine van der Meer is a Dutch actress, model and television host. She is best known for her portrayal of Meike Griffioen in the Dutch soap Goede tijden, slechte tijden and for hosting the TV-show Model in 1 dag. She has appeared as a guest-star in several television series such as Costa!, Baantjer, and Grijpstra & De Gier. 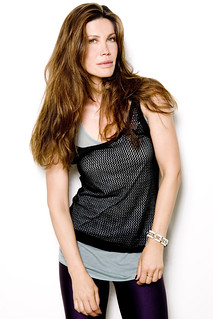 Born on December 19, 1971 in Scheveningen, Netherlands, her full name is Robine Tanya van der Meer. She married model Mark Vanderloo in 2011. They have two children.

Robine van der Meer Facts:
*She was born on December 19, 1971 in Scheveningen, Netherlands.
*She starred as Meike Griffioen in the Dutch soap Goede tijden, slechte tijden from March 2000 to February 2002.
*She was featured in Dutch Playboy in the summer of 2003.
*She hosted the Dutch TV programme Model in 1 dag (Model in 1 day) from 2008 to 2010.
*Follow her on Instagram.