Robyn Lively is an American actress. She is best known for her role as Louise Miller in the 1989 teen fantasy comedy film Teen Witch, and for her roles in the TV shows Doogie Howser, M.D., Twin Peaks, Savannah, and Saving Grace. In 2010, Lively appeared in the Dual Spires episode of Psych and starred as Gortimer Gibbon’s mother, Claire in the TV series Gortimer Gibbon’s Life On Normal Street for Amazon Studios. Born Robyn Elaine Lively on February 7, 1972 in Powder Springs, Georgia, into a family of actors, her parents are Elaine Lively and Ronald Otis (Ronnie) Lively. Her siblings are sister Lori and brother Jason, and her half-siblings are Eric and Blake. Lively began her career as a child actress: at age 6, she made her screen debut in the television movie Summer of My German Soldier in 1978. She is married to actor Bart Johnson with whom she has three children: a son named Baylen Johnson, a daughter named Kate Johnson and another son named Wyatt Blake Johnson. 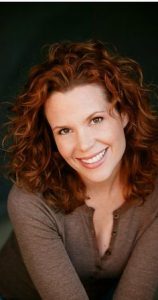 Robyn Lively Facts:
*Born on February 7, 1972 in Powder Springs, Georgia, she is the stepdaughter of Ernie Lively.
*She is of English, Scottish, and German descent.
*For her role as an insecure teen in the drama Less than Perfect Daughter, she was nominated for an Emmy Award.
*From 1992-1993, she dated Neil Patrick Harris.
*She is the godmother of her niece James Reynolds, a daughter of her younger half-sister Blake Lively and her husband Ryan Reynolds.
*Follow her on Twitter and Instagram.