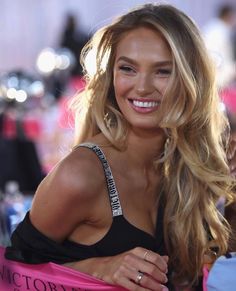 Romee Strijd Facts:
*She was born on July 19, 1995 in Zoetermeer, Netherlands.
*She signed with the New York-based DNA Model Management company at 15 years old.
*She was chosen to be one of the newcomers at the Victoria’s Secret Fashion Show in 2014.
*She became an official Victoria’s Secret Angel in April 2015.
*She was chosen to wear the Shooting Star Swarovski Look in the Victoria’s Secret Fashion Show in 2018.
*She became a brand ambassador for popular Australian swimwear brand Seafolly in 2018.
*She posed 26 weeks pregnant on the cover of the November 2020 issue of Dutch Vogue.
*She started her YouTube channel in July 2017. The channel has reached 1.7 million subscribers and a total of 130 million views.
*She is friends with models Daphne Groeneveld, Bette Franke, Anna de Rijk, and Erjona Ala.
*She enjoys cooking.
*Follow her on Twitter, YouTube and Instagram.