Mamrie Hart is an American internet personality, comedian, actress and writer, best known for her YouTube channel You Deserve A Drink, where she has more than 1.1 million subscribers and growing. She also co-wrote, co-produced, and co-starred in the 2014 film Camp Takota and the 2016 film Dirty 30. Born Mamrie Lillian Hart on September 22, 1983 in New Jersey, to parents Caroline and David Hart, she belongs to both Scottish and English descent. She has a sister named Annie and a brother named David. Hart did her schooling in Boonville, North Carolina and earned her Bachelor of Arts in drama and communications from University of North Carolina at Chapel Hill. She became famous in 2011 through her YouTube show You Deserve A Drink, for which she has won two Streamy Awards: in 2014 for Actress in a Comedy and in 2015 for Writing. 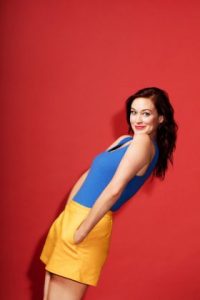 Mamrie Hart Facts:
*She was born on September 22, 1983 in Dover, New Jersey, USA.
*Her parents divorced when she was nine years old.
*She studied theatre at the University of North Carolina.
*She began her YouTube channel in June 2009.
*She is in a band called Cudzoo & the Faggettes, with her friends from North Carolina, Jessica Bartley and Erin McCarson.
*She is best friends with Hannah Hart and Grace Helbig.
*Follow her on Twitter, YouTube, Facebook and Instagram.