Rosamund Pike is an English actress who first came to international attention when she played Bond girl Miranda Frost in Die Another Day, for which she received the Empire Award for Best Newcomer. She has also played prominent roles in a number of films, including Jack Reacher (2012), An Education (2009), and Gone Girl (2014), for which she received a Golden Globe nomination for Best Actress in a Motion Picture, Drama. Born Rosamund Mary Elizabeth Pike in London, England, she is the only child of Julian, a professional opera singer and Caroline, a concert violinist. She has been in a relationship with Robie Uniacke since December 2009. They have two sons. 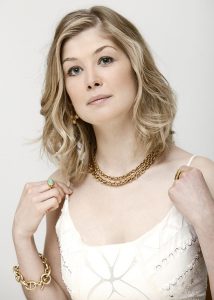 Rosamund Pike Facts:
*She is fluent in French and German.
*She plays the piano and cello.
*Johnny Depp is one of her favourite actors.