Tupac Shakur, better known by his stage names 2Pac and Makaveli, was an American rapper and actor. One of the greatest and most influential rappers of all time, Shakur released four albums from 1991 to 1996 and sold over 75 million records worldwide. He portrayed Travis Younger in the play, A Raisin in the Sun, at the Apollo Theater. In 2010, his song “Dear Mama” was added to the Library of Congress. Born Lesane Parish Crooks on June 16, 1971 in East Harlem, Manhattan, New York City, New York to Afeni Shakur and Billy Garland, he grew up in Baltimore, Maryland, USA. He studied drama at Baltimore’s School for the Arts as a teenager. He was married to Keisha Morris from 1995 to 1996. He was killed in a drive-by shooting after watching a Mike Tyson fight in Las Vegas, Nevada at age 25. 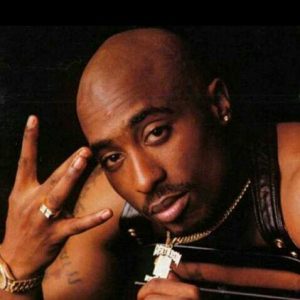 Tupac Shakur Facts:
*His career was began as a roadie, backup dancer and MC for the alternative hip hop group Digital Underground.
*He studied dance and ballet as a young man.
*He was placed at number 3 on VH1’s 50 Greatest Hip Hop Artists.
*His favorite actor was Jim Carrey.
*Prince was his favorite singer.
*He was friends with Snoop Dogg, Jon B., Keyshia Cole, and Jasmine Guy.
*He died with less than $100,000 in the bank.
*Website: www.2pac.com