Rosie Jones is an English stand-up comedian, actress and writer who has written for panel shows Harry Hill’s Alien Fun Capsule, Would I Lie to You?, The Last Leg and 8 Out of 10 Cats Does Countdown. Jones has appeared as a guest-star in several television shows such as The Last Leg, 8 Out of 10 Cats, 8 Out of 10 Cats Does Countdown and Hypothetical. She has performed stand-up comedy at the Edinburgh Festival Fringe, incorporating her cerebral palsy into her comedic style; in 2018, she was featured on Edinburgh Nights. She has also appeared on other television shows, wrote an episode of Sex Education and hosts the podcast Daddy Look at Me with Helen Bauer. 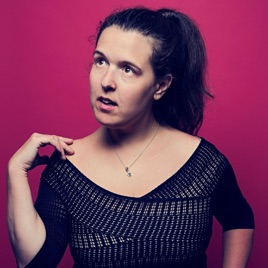 Born on June 24, 1990 in Bridlington, United Kingdom, Jones stopped breathing for about fifteen minutes when she was born. Because of that, she has ataxic cerebral palsy, a condition that affects her movement and speech. Jones started her career in 2011 as a researcher for Objective Media Group.

Rosie Jones Facts:
*She was born on June 24, 1990 in Bridlington, United Kingdom.
*She started her career as a TV researcher and then scriptwriter.
*She first performed stand-up comedy without preparation at a friend’s comedy night.
*In 2016, Jones wrote for The Last Leg when it covered that year’s Paralympics.
*She placed second in Leicester Mercury’s New Comedian of the Year 2018.
*She describes her style as “cheeky”, commenting that she makes jokes that able-bodied people could not.
*She is openly lesbian.
*Visit her official website: www.rosiejonescomedy.com
*Follow her on Twitter, Facebook and Instagram.