YBN Nahmir is an American rapper, songwriter and actor who formed the hip hop collective YBN in Birmingham, Alabama in 2014. He is best known for singles such as “Rubbin Off The Paint”, “Bounce Out with That”, and “Opp Stoppa”. On March 26, 2021 YBN Nahmir released his debut album Visonland. 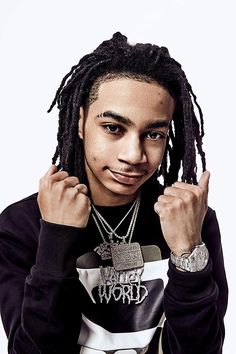 Born on December 18, 1999 in Birmingham, Alabama, his real name is Nicholas Alexander Simmons. He was raised in a home with his mother, his cousins and his auntie. Simmons was educated at Clay-Chalkville High School in Clay, Alabama. He has dated Daniela Caceres and Alycia Tyre.

YBN Nahmir Facts:
*He was born on December 18, 1999 in Birmingham, Alabama, USA.
*He first achieved fame after the release of his “Rubbin Off The Paint” video to YouTube in September 2017.
*He was signed to play at the Rake It Up Glow Party in October 2017.
*Visit his official website: www.y-b-n.com
*Follow him on Twitter, SoundCloud, Facebook and Instagram.