Ruth Negga is an Ethiopian-Irish actress. She is best known for her roles as Mildred Loving in the 2016 American biographical romantic drama Loving, and Tulip O’Hare on the AMC supernatural drama series Preacher. For her role of Mildred Loving in Loving, she was nominated for an Academy Award for Best Actress, Golden Globe Awards for Best Actress in a Motion Picture – Drama, Independent Spirit Award for Best Female Lead, Critics’ Choice Movie Award for Best Actress and won an Irish Film and Television Award for Best Actress. Negga is also notable for her roles in television, such as such as in the BBC miniseries Criminal Justice, RTÉ’s Love/Hate, ABC’s Agents of S.H.I.E.L.D. and E4’s Misfits, and in the films Capital Letters, Isolation, Breakfast on Pluto and Warcraft. Born on January 7, 1982 in Addis Ababa, Ethiopia, to an Ethiopian father and Irish mother, she was raised in Limerick, Ireland, from the age of four. She made her screen debut in the 2004 Irish film Capital Letters. She graduated with a BA in Acting Studies from the Samuel Beckett Centre at Trinity College, Dublin. Negga was in a relationship with actor Dominic Cooper beginning in 2010. 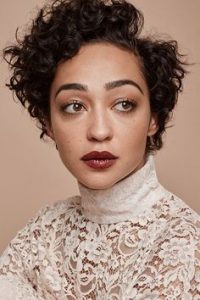 Ruth Negga Facts:
*She was born on January 7, 1982 in Addis Ababa, Ethiopia.
*She’s the only child of Norra and Dr. Negga.
*She starred as Tulip O’Hare in the AMC fantasy drama series Preacher from 2016 to 2019.
*She was ranked number 10 on The Irish Times list of Ireland’s greatest film actors in 2020.
*Her favorite films are All About Eve, Bringing Up Baby, Big Business, Outrageous Fortune, Legend and Labyrinth.