Takeshi Honda is a Japanese former competitive figure skater. He is the two-time World bronze medalist, two-time Four Continents champion, and six-time Japan national champion. He placed 4th at the Winter Olympics. In 1999, he became the first Four Continents champion in history when he won the inaugural event. Born on March 23, 1981 in Koriyama, Japan, he has an older brother named Hiroshi. He started short track speed skating when he was 6 years old, and switched to figure skating when he was 9. He is married to Honda with whom he has one child. 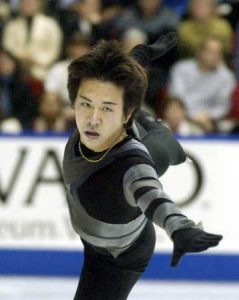