Sandra Bullock is an Academy Award-winning American actress. She is best known for her roles in the films Speed, Miss Congeniality, The Blind Side, Demolition Man, Crash, A Time to Kill, The Proposal, Gravity, While You Were Sleeping and The Heat. For her performance as Leigh Anne Tuohy in The Blind Side, she won a best actress Academy Award and Golden Globe. She provided the voice of Scarlett Overkill in the 2015 film Minions. Born Sandra Annette Bullock on July 26, 1964 in Arlington, Virginia, USA, to Helga Meyer and John W. Bullock, she spent much of her childhood in Nuremberg, Germany. After graduating from Washington-Lee High School in Arlington, Virginia in 1982, she studied drama at the East Carolina University in Greenville, North Carolina. She made her film debut with a minor role in the 1987 thriller Hangmen. Bullock was married to Jesse Gregory James from 2005 to 2010. She has an adopted son, Louis and a daughter, Laila. She has been in a relationship with photographer Bryan Randall since 2015. 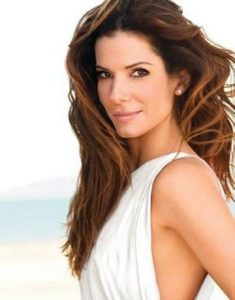 Sandra Bullock Facts:
*She is of English, Irish, German and French descent.
*She studied ballet when she was a child.
*She was a gymnast and cheerleader while in high school.
*She can dance flamenco, salsa and tango, and played the piano since she was age 8.
*She has dual citizenship of German and American and fluent in English and German.
*People (USA) magazine named her one of the top 50 Most Beautiful People in the World in 1996 and 1999.
*She was once the highest paid actress in Hollywood.
*She used to work as a bartender and cocktail waitress.
*She owns the Bess Bistro restaurant in Austin, Texas.
*In 2007, Empire magazine named her at number 66 in the list of 100 Sexiest Stars.
*Forbes magazine estimated her earnings for the year at $10 million in 2007.
*She is the owner of a production company, Fortis Films.
*People magazine named her person of the year for 2010.
*Entertainment Weekly named her Entertainer of the Year in both 2009 and 2013.
*She is good friends with Samantha Mathis, Heidi Klum, Nicole Kidman, Renée Zellweger, Meryl Streep and George Clooney.