Sara Evans is an American country music singer-songwriter, best known for her #1 hits, gold albums and platinum albums. Sara released her debut album, Three Chords and the Truth, in 1997, followed by her second album, No Place That Far in 1998. Her song “Born to Fly,” won a Country Music Award in 2001. Born Sara Lynn Evans on February 5, 1971 in New Franklin, Missouri, to parents Patricia Boggs and Jack Evans, she has six younger siblings. She grew up on a farm near New Franklin, Missouri. She belongs to Welsh, English, Irish, and Native American descent. She started performing in a nightclub in Columbia, Missouri at age 16. She married Craig Schelske in 1993, and the couple had two daughters, Audrey and Olivia, and a son, Avery before getting divorced in 2007. She married Jay Barker in 2008. 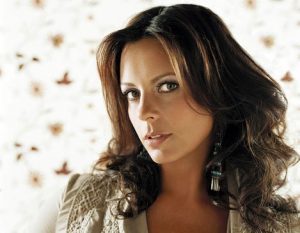 Sara Evans Facts:
*She was born on February 5, 1971, in New Franklin, Missouri.
*She is the eldest of seven children.
*She was hit by a car in front of her house and broke both of her legs when she was eight years old.
*People Magazine named her one of the top 50 Most Beautiful People in the World in 2005.
*Visit her official website: www.saraevans.com
*Follow her on Google+, Twitter, YouTube, Facebook and Instagram.