Seohyun is a South Korean singer and actress, best known as a member of SM Entertainment’s girl group Girls’ Generation, which known for singles like “Kissing You,” “Run Devil Run” and “Into the New World.” She is joined in Girls’ Generation by Yoona, Tiffany, Yuri, Sunny, Taeyeon, Hyoyeon, Sooyoung and Jessica. She has also pursued a solo career, releasing songs like “Oppa Nappa.” Aside from her success in music, Seohyun has established herself as an actress, notably through her participation in the original and Korean versions of stage musicals including Moon Embracing the Sun, Gone with the Wind and Mamma Mia. She also played a supporting role in the 2016 television drama Moon Lovers: Scarlet Heart Ryeo. Seohyun provided the voice of Edith for the Korean versions of both “Despicable Me” and “Despicable Me 2”. 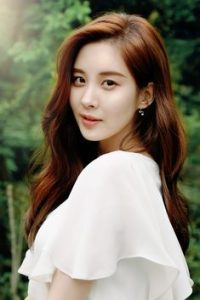 Seohyun Facts:
*Born on June 28, 1991 in Guro-dong, Seoul, South Korea, she is the only child in her family.
*She learned to play violin, guitar, piano, traditional Korean drums, horseback riding, and skating at a very young age.
*She was scouted by a talent scout while riding in a subway train.
*She debuted as a member of girl group Girls’ Generation in August 2007.
*The youngest member of the Korean girl group, Girls’ Generation.
*She released her debut EP Don’t Say No in 2017.
*She cites BoA, S.E.S and Fin.K.L. as big influences.
*She is fluent in Korean and Chinese and can speak conversational Japanese and English.
*Follow her on Twitter and Instagram.