American entrepreneur who is best known for being on the team that founded Democracy Prep Public Schools, a national network of charter schools based in Harlem, and Democracy Builders, a social sector incubator that launched Washington Leadership Academy, the Arena Summit, and Degrees of Freedom. From 2014 to 2016, Andrew served as senior advisor and superintendent-in-residence at the U.S. Department of Education and was a senior advisor in the Office of Educational Technology under the Presidency of Barack Obama. 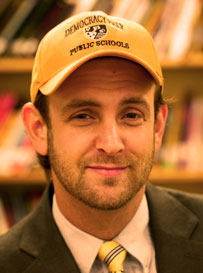 A New York City native, Andrew attended the Bronx High School of Science, earned his A.B. from Brown University, and his Ed.M from the Harvard Graduate School of Education. Andrew is married to CBS News correspondent Lana Zak. They have three children.

Seth Andrew Facts:
*He is founding president of Degrees of Freedom, a nonprofit organization.
*In 2005, he launched Democracy Prep Public Schools in Harlem, New York.
*In April 2021, he was arrested and accused of embezzling over $200,000 from Democracy Prep.
*Follow him on Twitter and LinkedIn.