Seth Macfarlane is an American actor, comedian, animator, writer, producer, director, singer and voice actor. He is best known as the creator of the animated television series Family Guy and The Orville, and co-creator of the TV series American Dad! and The Cleveland Show. Macfarlane also wrote, directed, and starred in the films Ted, its sequel Ted 2, and A Million Ways to Die in the West. He has also made guest appearances in a number of television shows, including Gilmore Girls, The War at Home, Star Trek: Enterprise, and FlashForward. As a singer, Macfarlane has performed at Carnegie Hall in New York and the Royal Albert Hall in London. He has also released multiple Grammy-nominated albums featuring his covers of selections from the Great American Songbook. Born Seth Woodbury MacFarlane on October 26, 1973 in Kent, Connecticut, to parents Ann Perry and Ronald Milton MacFarlane, he is of English, Scottish, and Irish descent. He completed his schooling from Kent School and went to Rhode Island School of Design (RISD), a school in Rhode Island where he studied animation. Following graduation from RISD, Macfarlane was hired by Hanna-Barbera Productions. 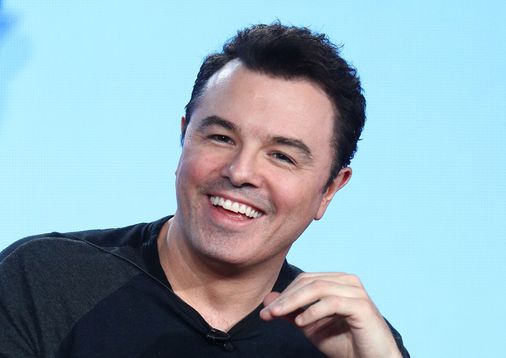 Seth Macfarlane Facts:
*Born on October 26, 1973 in Kent, Connecticut, he was raised Roman Catholic but turned it into a joke by age 11 and became an atheist.
*His father was a teacher, and his mother was an academic administrator.
*He studied animation at the Rhode Island School of Design (RISD).
*He debuted the animated hit Family Guy in 1999.
*He was inspired by the sitcom All in the Family to write for television.
*He created his own YouTube series titled Seth MacFarlane’s Cavalcade of Cartoon Comedy in 2008.
*He earned the Webby Award for Film & Video Person of the Year in 2009.
*He is an avid fan of Star Wars and Star Trek.
*He owns a production company called Fuzzy Door Productions.
*He is a devoted supporter of the Democratic Party.
*He is best friends with Butch Hartman.
*He is a huge fan and personal friend of Keith Olbermann.
*He is a huge fan of Woody Allen and Rex Harrison.
*He is a huge fan of Grammy Award winner Billy Joel.
*He is good friends with Alan Silvestri, Neil deGrasse Tyson, Mike Judge, Jon Favreau, Matt Groening, Bill Nye, Neil Patrick Harris, Seth Meyers, Charlize Theron and Amy Schumer.
*Follow him on Twitter, YouTube, Facebook and Instagram.