Grammy Award-winning American classical guitarist who is the founding director of the guitar department at the Juilliard School. Isbin became the first classical guitarist to win a Grammy in 28 years after she won Best Instrumental Soloist in 2001 for her album “Dreams of a World: Folk-Inspired Music for Guitar.” She is also the author of the Classical Guitar Answer Book, and is director of the Guitar Department at the Aspen Music Festival. Born on August 7, 1956 in St. Louis Park, Minnesota, to parents Katherine Isbin and Herbert S. Isbin, she started her guitar studies at age 9 with Aldo Minella in Varese, Italy. She studied with Jeffrey Van, Oscar Ghiglia, Sophocles Papas, Andrés Segovia, Alirio Díaz, and for ten years with the noted keyboard artist and Bach scholar Rosalyn Tureck. Isbin received a B.A. cum laude from Yale University and a Master of Music from the Yale School of Music. 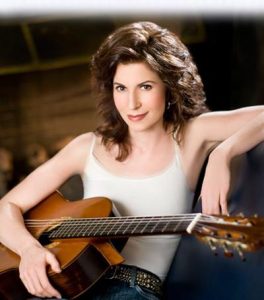 Sharon Isbin Facts:
*She was born on August 7, 1956 in St. Louis Park, Minnesota, USA.
*Her father, Herbert S. Isbin, was a nuclear scientist and professor at the University of Minnesota and author of Introductory Nuclear Reactor Theory (1963).
*She started her guitar studies at age 9 with Aldo Minella in Varese, Italy.
*She started practicing Transcendental Meditation at age seventeen.
*She founded the guitar department at the prestigious Juilliard School in 1989.
*She has had the honor of performing for the Obama family at the White House in 2009.
*Visit her official website: www.sharonisbin.com
*Follow her on Twitter, Facebook and YouTube.