Shermine Shahrivar is an Iranian-born German fashion model and beauty queen who was crowned Miss Germany 2004 and Miss Europe 2005. In 2008, Shahrivar became the face American Apparel. Born on September 17, 1982 in Tehran, Iran, to Iranian parents, her family moved to Germany when Shahrivar was one year old. Her mother and brothers live in Germany. She earned her degrees in political science, psychology and German literature from Rheinisch-Westfälische Technische Hochschule Aachen University. She dated German actor Thomas Kretschmann in 2008 and was in a relationship with Australian actor Xavier Samuel from 2010 to 2011. She began dating Lapo Elkann. 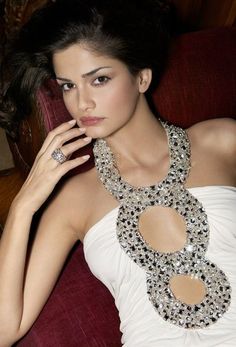 Shermine Shahrivar Facts:
*She was born on September 17, 1982 in Tehran, Iran.
*When she was one year old her family moved to Germany, where she was raised in Aachen.
*She holds a university degree in social sciences.
*She was named Miss Germany in 2004 and then won the title of Miss Europe in 2005.
*She was named as the host of the 2005 Oberhausen, Germany Nowruz celebration.
*From December 2004 to August 2005, she hosted Traumpartner TV in Germany.
*She is fluent in German, Persian, English and French
*Her hobbies include swimming and horse-riding.
*Visit her official website: www.shermineshahrivar.com
*Follow her on Facebook and Instagram.