Shirley Manson, born August 26, 1966, is a Scottish singer, songwriter, musician and actress, best known by the public as the lead singer of the alternative rock band Garbage. She is also known for her recurring role on Fox’s Terminator: The Sarah Connor Chronicles. Born Shirley Ann Manson in Edinburgh, Scotland, she is the daughter of John Mitchell and Muriel Flora Manson. Her father, John, was a biology teacher while her mother, Muriel, was a big band singer. She has an older sister named Lindy, and a younger sister named Sarah. Manson belongs to white ethnicity and holds a Scottish nationality. She has been married to Billy Bush since May 2010. She was previously married to Eddie Farrell from 1996 to 2003. 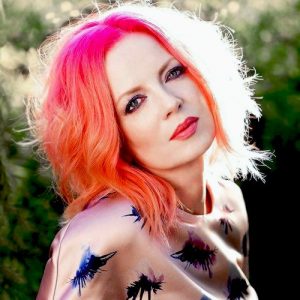 Shirley Manson Facts:
*Her father was a biology teacher while her mother was a big band singer.
*She dropped out of high school at 16.
*She quit smoking after her husband’s nephew died of cancer at age 7.
*She was a model for Calvin Klein.
*She had a recurring role on Fox’s Terminator: The Sarah Connor Chronicles.
*Connect with her on Facebook.