Simi Chahal is an Indian film actress who works predominantly in Punjabi films. She made her film debut in the 2016 Punjabi film Bambukat, for which she won a Filmfare Award (Punjabi) for Best Debut Actress in 2017. Simi has also appeared in such films as Sarvann, Rabb Da Radio, Golak Bugni Bank Te Batua and Daana Paani. She appeared in India’s Popular stand-up comedy and talk show The Kapil Sharma Show alongside with Priyanka Chopra and Ranjit Bawa. Born Simarpreet Kaur Chahal on May 9, 1992 in Ambala, Haryana, India, Chahal started her career in the entertainment industry at age 22, appearing in some Punjabi music videos. 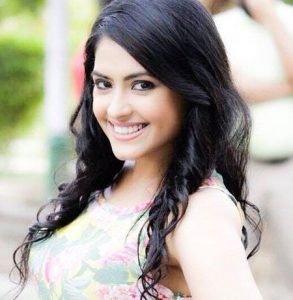 Simi Chahal Facts:
*She was born on 9 May 1992 In Ambala Cantt, Haryana, India.
*She started her career in the entertainment industry in 2014.
*She was discovered by talent scouts.
*She appeared alongside actor Binnu Dhillon in the 2016 drama film Bambukat.
*She won the Best Actress Critics Award at the PTC Punjabi Film Awards in 2018.
*One of her hobbies is painting.
*Follow her on Facebook and Instagram.