Sofia Kenin is an American professional tennis player who achieved a career-high singles ranking of World No. 4 on March 9, 2020. She won her first Grand Slam title at the 2020 Australian Open, becoming the youngest American to win a Grand Slam women’s singles title since Serena Williams won the US Open in 1999. Turning professional in 2017, Kenin has won five WTA singles titles in total. She has also won two WTA doubles titles, including the 2019 China Open at the Premier Mandatory level with Bethanie Mattek-Sands. Born Sofia Anna Kenin on November 14, 1998 in Moscow, Russia, to parents Lena and Alexander Kenin, her family moved to the United States a few months after she was born. She has one younger sister named Anya. Kenin began playing tennis at the age of five. 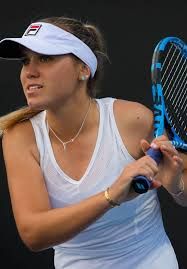 Sofia Kenin Education:
She was homeschooled.

Sofia Kenin Facts:
*She was born on November 14, 1998 in Moscow, Russia.
*She started playing tennis at age five and was inspired by her father.
*She represented Team USA at the 2014 Summer Youth Olympics.
*She was named the WTA Most Improved Player of the Year in 2019.
*She won the 2020 Australian Open.
*Visit her official website: www.sonyakenin.com
*Follow her on Twitter, Facebook and Instagram.